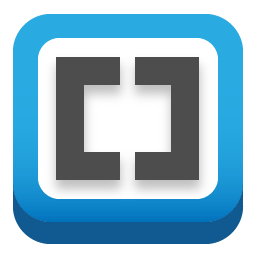 I recently posted on the state of native desktop apps in HTML5 and mentioned that at my company we chose to use Brackets-Shell as our native app solution. I want to go more in-depth into what brackets is and why we chose it as our solution. This will be the first of a series of posts dedicated to brackets-shell and customizing it for your native HTML desktop applications.

UPDATE: I Posted part 2 of the series: JavaScript and the Brackets Shell Environment

Brackets is an open-source code editor created by Adobe. What makes brackets so cool, though, is that the entire editor is written in HTML and JavaScript. This puts Brackets in a unique opportunity that allows pretty much any developer that would use the editor (HTML and JavaScript guys) to add to and improve the editor with the very languages they use on a regular basis. And while I don’t use brackets myself just yet (hard to leave Sublime Text) it is definitely on my radar and I may make that switch soon.

What is Brackets Shell?

Brackets Shell is what allows Brackets to be run as a desktop application. It takes Chromium Embedded Framework (CEF) and adds some extras along with an excellent build tool. The brackets-shell app is so well done, it made it easy for a web-developer like me to get my first ever C++ pull request accepted (I took credit for that whole pull request, but the windows portion was done by my good friend, Jordan).

Why Use Brackets Shell Instead of Other Solutions?

Now on to the good stuff.

Test Your Application in Brackets Shell

To remove the brackets HTML app on Windows, browse to the Brackets folder in your Program Files directory. Inside the Brackets folder there is a folder named ‘www’. Rename or delete that folder, then run Brackets. The file dialog will open prompting you to select your own index.html file.

On OSX, open the terminal and browse to your application directory. Applications in OSX are actually folders, and in terminal you can view their content. CD into the Brackets Sprint [sprint number].app folder and continue to the Contents directory. Inside there you will see the www folder. Delete or rename it and then run brackets. You will see the file dialog prompting you to select your own index.html file.

If your app runs well in brackets-shell your next step is to setup your computer to build brackets-shell. This is where the shell really shines. They have an amazing Grunt setup that allows you to run the build in one command. Brackets provides some great instructions on setting up your box here. Once you are setup, run `grunt build` from the command line and it should create a full build of brackets shell for you. So awesome.

Setup for Your App

This is where things get fun. Let’s make the shell be a full-on desktop app for our own software. Make sure you have followed the instructions for getting setup to build brackets-shell and then take these next steps:

Now you are all setup. To see what grunt commands you have available type in `grunt –help` at your terminal

Look at all that goodness! So many Grunt commands at your disposal all ready to go.

The first thing you need to do is run the cef command, which will download Chromium Embedded Framework and prep it for your build. Type `grunt cef` in your terminal and you should see something like this:

Now do the same thing for node.js by typeing `grunt node` in the terminal:

Now you are ready to do a full-build. To do that (yup, you guessed it) type `grunt full-build`. It will take a bit of time, and will end with a warning:

Don’t worry about the warning, if you made it that far you made a full build! You can check out your newly-built app in the brackets-shell/installer/(mac or win, depending on your OS)/staging folder. Run it and make sure it loads your index.html file by default now. (it shouldn’t prompt you to locate an index.html file, it should just open and run the one from your html application)

You probably noticed your new application’s name was “brackets” and that your icon for the app was the brackets logo. You don’t want that, so let’s change the name of your app to “Awesome”.

There are a couple of places you will need to change to get your app name changed: 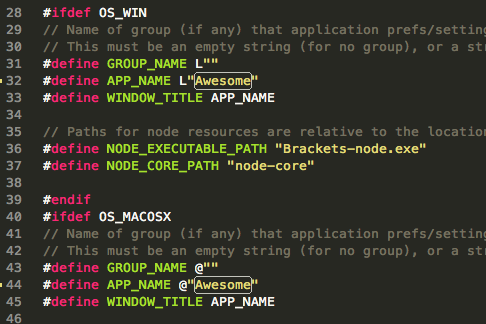 For basic HTML apps that you just need a shell for, this might be all you need. But this is only the beginning of what you can do with brackets-shell. Over the next few weeks I will be posting new tutorials showing how you can:

As always, let me know if you have any comments or questions!